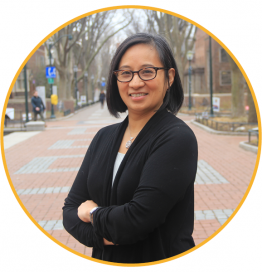 Katherina ‘Kat’  M. Rosqueta is the founding executive director of the Center for High Impact Philanthropy. Founded as a collaboration between the University of Pennsylvania’s School of Social Policy & Practice and alumni of the Wharton School, the Center for High Impact Philanthropy is the premier source of knowledge and education to help donors around the world do more good.

Before accepting her appointment to launch the Center, Kat was a consultant with McKinsey & Company; a consultant to the founding team of New Schools Venture Fund; founding director of Board Match Plus, a San Francisco program dedicated to strengthening nonprofit boards; and program manager of Wells Fargo’s Corporate Community Development Group.

She has held numerous civic leadership positions including board president of La Casa de las Madres (San Francisco’s oldest and largest shelter for battered women and their children), chair of the United Way’s Bay Area Week of Caring, and co-founder and executive committee member of the Women’s MBA Network. She currently serves on the board of GuideStar, the world’s largest source of information on nonprofits, and co-chairs Greenlight Fund Philadelphia, a venture philanthropy fund dedicated to addressing urgent social needs in Philadelphia.

Her work and comments have been cited in numerous publications including the New York Times, Slate, Money Magazine, and the Wall Street Journal. She speaks frequently on social impact management and philanthropy and has lectured at the Wharton Business School, Stanford Graduate School of Business, University of California Haas School of Business, and the University of San Francisco’s Institute for Nonprofit Organization Management.